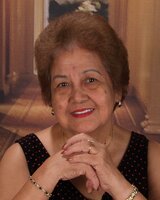 Maura Aca Abueg, age 91, of Pembroke Pines, Florida passed away on Tuesday, July 26th, 2022. Funeral mass will be held at St. Maximilian Kobe Catholic Church, 701 N. Hiatus Road, Pembroke Pines, Florida 33026 at 11am. Visitation/viewing will be held at Joseph A. Scarano Funeral Home, 9000 Pines Boulevard, Pembroke Pines on Friday, July 29th, 2022 from 4p-9p. Joseph A. Scarano Funeral Home will be handling the funeral arrangements. Maura, known to many as Auring or “Nanay” was born in Paete, Laguna, Philippines to Angel Aca, Sr. and Dolores Calabig Aca on November 30, 1930. She was a graduate of Baybay Community College in Paete, Laguna and went on to earn a degree at Far Eastern University. Afterwards in the evenings she worked as an English teacher at Bohol High School and in the daytime she worked at the Bureau of Lands and Tourism. The latter was the job that gave her the opportunity to come to the United States where she met the “love of her life”, Romeo Topacio Abueg. Together they raised a family until his death did they part. While in California she worked as a nurse aide and later a bank teller. After moving to Miami she continued her career as a bank teller achieving the position of assistant vice-president until she retired. She served as treasurer of the Filipino-American Association of Florida for 31 years. This is where she met many of her closest friends. She was very active in heading the Filipino food booth for St. James Catholic Church in North Miami during their annual carnival in the 1980s and early 1990s. She also aided in teaching Sunday school at the same parish. Maura’s biggest pleasure was her weekly family dinner that included sharing quality time with her children and grandchildren. This was family time. Anyone who knows Nanay knows that her priorities were her family and her Catholic faith. However, her next favorite activity was her social weekend marathon with her friends playing mah-jong. She later added her weekly “donation to the church” (as said in her own words) which to everyone else meant playing bingo. She and her friends would also “tour and donate” to the different local casinos of south Florida. Was Nanay a gambler? No she was just very charitable! Maura Aca Abueg is survived by: Daughters Rebecca and her husband Abundio S. Baet, and Remedios A. Abueg Grandchildren Alyssa Rachele and her husband Gianni Barrera, Jaylan Romeo Abueg, Michael W. Abueg, Jr. and his wife Veronica, Melissa and her husband Nathan Tejano, Alexa Medina, Gwendalyn Aca, Justin Medina, Gianmarco Aca, Anthony Medina, Yesenia Medina, and Joshua Baet Great-grandchildren Noah Abueg, Dylan Abueg, Angelo Abueg, Paxton Tejano and Maddex Tejano She was preceded in death by: Husband of 23 years, Romeo Topacio Abueg Son Manuel Aca Abueg Step-sons Romeo T. Abueg, Jr and Michael W. Abueg Sr Parents Angel Aca Sr. and Dolores Calabig Aca Siblings Justino C. Aca, Rogelio C. Aca, Angel C. Aca Jr and Cesar C. Aca