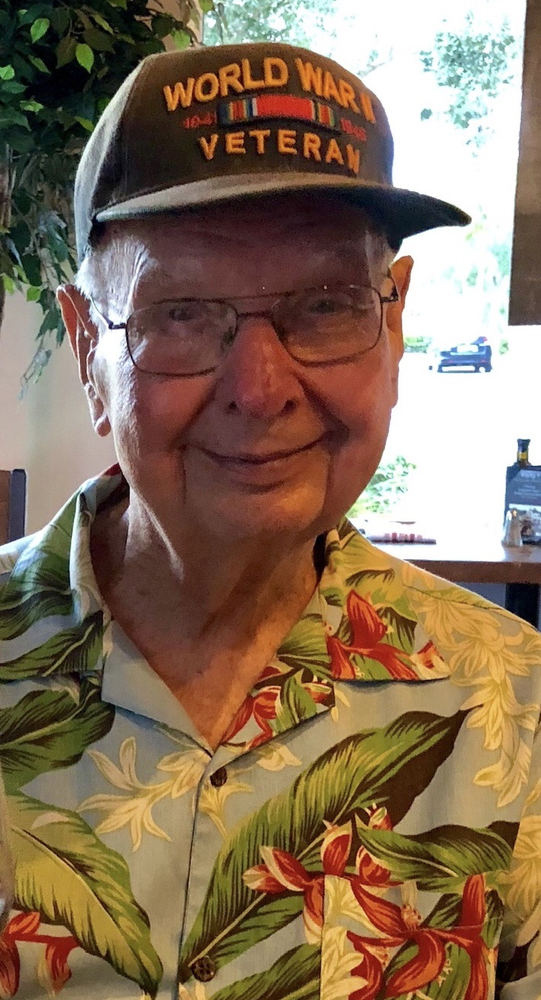 Obituary of Fredrick A. Richards

Fredrick Alexander Richards, 91, of Hollywood, FL peacefully passed away on September 4th in his home surrounded by family. Fred was born on May18th,1928 to Charlotte Richards. His father Floyd passed away before he was born. He had a sister Jospehine and two brothers, Charles and Floyd. Fred spent his childhood in Zion, IL raised by the Tillman’s, a foster family. On his 15th birthday, he enlisted (underage) in the US Navy to serve in WWII. He served on the USS Parche SS384 as a Radioman Class III. After the war, he finished high school and started working at the Zion Gardens Florist, which he later bought.

Fred had three sons, Douglas, Charles, and David with his first wife Agnes. An exceptional salesman, Fred met the love of his life Patricia while selling cookware in Jacksonville. In 1957 they married and shortly after moved to South Florida. Fred and Pat were married 46 wonderful years until her passing in 2004. Their house was always open to the neighborhood kids, they attended the Miami Dolphins games as season pass holders, enjoyed the theatre and the symphony and traveled the country. Fred spent 32 years selling life insurance for United Insurance Company of America; his territory Hallandale, Florida. After retiring from United Insurance, he and Pat owned Daisy South Florist in Hollywood, Florida.

Fred and his oldest son Douglas had a special bond, from their love for fishing to joint ventures in real estate and their almost daily talks. Fred cherished their time together, whether it be a convention Doug accompanied his father to, a drink at the VFW or American Legion or playing cards at home.

Fred dedicated several years to local politics in hopes to improve the city he loved. A passion for traveling, Fred drove cross country for various Submarine and Veteran’s conventions. In the summer you could find him in his hometown of Zion, IL for the annual Richards’ Family 4th of July picnic. This year was the 106th celebration and Fred’s last visit.

Anyone who met Fred would tell you he was a true gentleman who loved to do for others and give back to his community. Fred had many charities close to his heart and he was very generous to all of them. Fred was an eternal optimist; no matter the circumstance, his glass was always half full. He was also a great storyteller and would recount in detail his childhood and the war.  Fred was a devout Catholic - he loved God and his Savior Jesus Christ. Many years ago he found a second home at the Hollywood Hills United Methodist Church where he enjoyed the worship service and made many friends. Fred wore his WWII cap everywhere - he enjoyed the conversations it started and the unexpected generosity of others who would pick up his tab when they saw he was a WWII vet.

He was lucky enough to find love one last time when he met Delores Besterda, they spent 4 years together until her passing in 2018. Fred loved TY Park and enjoyed daily walks and working out there. Most days Fred would start his day at TY, pick Delores up and they would visit the VFW, American Legion or Moose Lodge for a quick bite and beers, watch a movie at home then enjoy happy hour at various restaurants around town.

He is preceded in death by his parents Floyd and Charlotte, his brothers Charles and Floyd, his sister Josephine, his wife Patricia and his granddaughter Alexis.

Memorial contributions can be made to the Friends of TY Park or the American Cancer Society. The family requests flowers be coordinated with Eden Florist www.EdenFlorist.com 954-981-5515.

Wednesday, September 11th at 11 AM

Share Your Memory of
Fredrick
Upload Your Memory View All Memories
Be the first to upload a memory!
Share A Memory
Plant a Tree