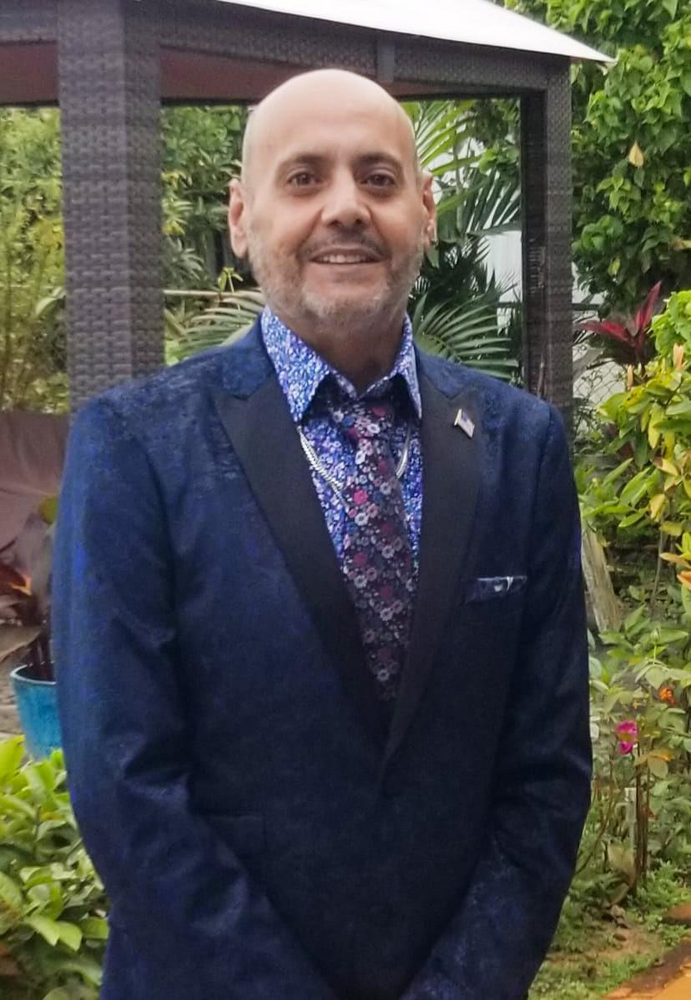 Carlos Perez, my husband, was born on September 5th, 1963 and passed on January 31st, 2022. God let us meet in the year 1990 and little did I know at that time that he would be an awesome father to both of our children, Jaime and Samantha. When we first met - time stopped. And it was the best rollercoaster ride of my life! He brought me joy, happiness and the feeling of protection. He was an amazing person, caring, loving to those he called family. He loved the water so much that he got his diving license. He enjoyed collecting and shooting guns so much that he had our kids shooting at a range before they were even teenagers. He was always looking for the gun that would make his collection great. His other love was cars. God did that man love cars! That’s how he got me to finally get my drivers license, (he bribed me with a car). He loved our family vacations. Above all he enjoyed seeing, hearing, feeling our kids enjoy themselves and most of the time I ended up with three kids instead of two, lol. He was my treasure, my strength and my world for a very long time. Carlos “Smoky” Perez was a firecracker come to life! Fueled by charm, sarcasm and wit, he was the type of man that won over the hearts of almost everyone he encountered. When raising his kids, he used tough love but also made sure they knew they were loved. He was practically Sam’s best friend growing up. He was there when she wanted to play Barbies or sit on the fire escape in The Bronx, New York and howl at the people walking by. He would play with Jaime in the snow and when inside, he would play video games with him too. He taught them to be self sufficient so that they wouldn’t have to depend on others. Learning how to use power tools or how to change a tire pale in comparison to the life lessons learned during these times though. There were many and that advice still plays through the head of both his children. While he may have only had two children living in his home, he was a father to many. Any friend that stepped into the house became family. He could talk to you for five minutes and then claim you as a daughter or a son. He greeted everyone with hugs, kisses, and high-fives, even if they were new to coming over. He was supportive and didn’t judge anyone who came into our house. He was the type to learn about your hobby so he could talk to you about it. During Jaime’s first baseball game as a preteen, the whole family was there but Carlos was the loudest. After getting his first hit, the only person Jaime heard was his father, yelling that he’s super-fast and his triumphant “Yeah!” as the young boy made it to base with a safe. He made sure to walk over to his son and tell him he did a good job, something he did again soon after witnessing the boy steal second base two pitches later with a cheeky wave to his family. When Sam and company would sit in the kitchen and make a mess of fabric and thread during costume making, he would come in and ask questions. He supported his kids interests, all his children. Whether it was someone wanting to be an artist, a baseball player, perform in drag, or make a better life for themselves away from the chaos of where they were growing up, he was there to back them up one hundred percent. Carlos had so many fine qualities. He loved his family, his friends and his dogs. This is a great loss indeed, but let’s relive our wonderful memories of him and celebrate his life! Remember, he’s no longer in pain or in poor health. He is now with our dear departed loved ones and being the life of the party in heaven!
Saturday
5
February

Share Your Memory of
Carlos
Upload Your Memory View All Memories
Be the first to upload a memory!
Share A Memory
Plant a Tree