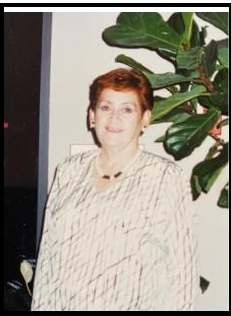 Please share a memory of Ana to include in a keepsake book for family and friends.
View Tribute Book
It is with great sadness that the family of Beatriz Mahecha Perea (Betty) announce her sudden passing on Wednesday evening, on June 22, 2022, at the age of 78. She will be lovingly remembered by her daughter, Ivette Bova, PharmD; Son-in-law, Michael Bova; granddaughters, Kasey and Kyara Bova; daughter, Emily Moreno; son-in-law, William Moreno; grandchildren, Monique Aquino, Andrea Moreno, and Michael Moreno; daughter, Sandra Rodgers; son-in-law, Carlos Rodgers (12-4-2019); Grandchildren, Natalie Rodgers and Brian Rodgers (11-17-2005); Great Grandchildren in order, Olivia Tremble,Joseph Aquino Jr., and Isabella Aquino; sister, Maria Cristina Mahecha. She was also beloved by her animals;Khloe, Kodi, Nala, Romeo and Pikachu. Beatriz was born in Venezuela, raised and educated in Colombia. With her Doctorate in Political Science and Masters in Education, she had a successful career in Colombia as a principal. She welcomed her daughter, Ivette Bova on October 27, 1978. In December of 1986, she and her daughter immigrated to the United States. Beatriz wore many hats in order to raise her daughter independently in the United States. Unable to use her professional credentials, she found success in her own massage business and home care.Beatriz was an extraordinary woman. Outside of raising her own biological daughter she raised many other children that were dropped at her doorstep. She was passionate about many things that were dear to her including the news,sports, and animals. Her age did not hold her back from learning technology and she would be the first to respond on a social media post. She was a staunch advocate for the people that she loved until the end.Beatriz was a very private person and didn’t like being the center of attention; therefore per her wishes there will not be a funeral service. A memorial service will be held where her ashes will be laid. The family will notify loved ones when this is scheduled. In lieu of flowers, donations can be made to ASPCA. “Death leaves a heartache no one can heal. Love leaves a memory no one can steal” -Irish proverb

A Memorial Tree was planted for Ana
We are deeply sorry for your loss ~ the staff at Joseph A. Scarano Pines Memorial Chapel
Join in honoring their life - plant a memorial tree

Share Your Memory of
Ana
Upload Your Memory View All Memories
Be the first to upload a memory!
Share A Memory
Plant a Tree