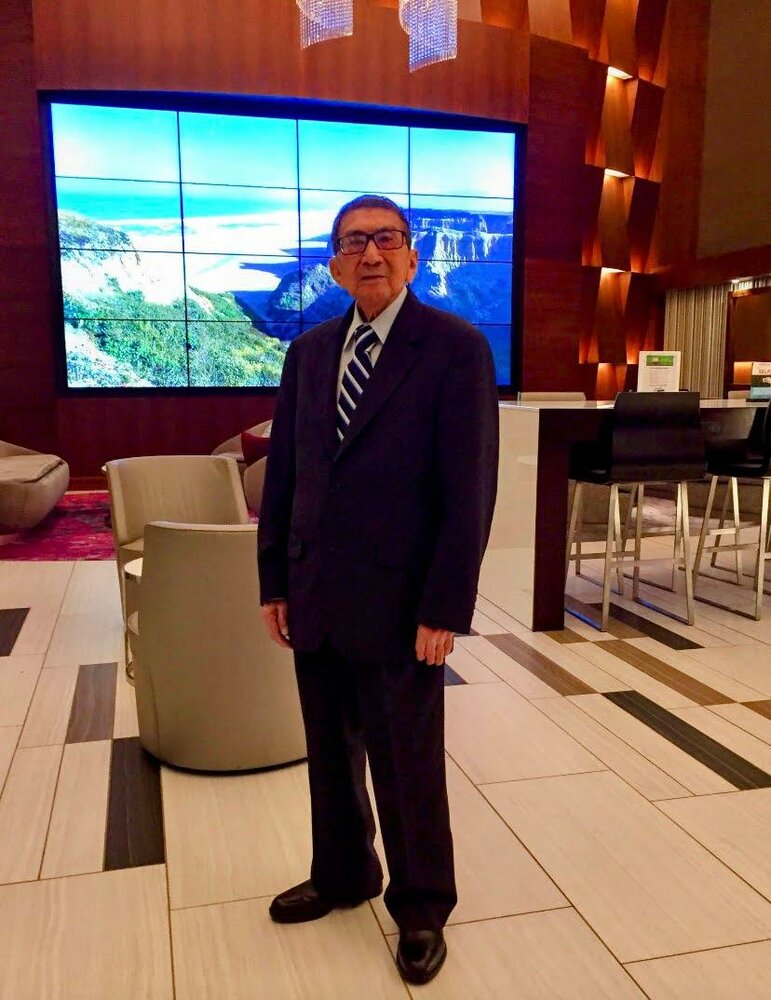 Obituary Gabriel A. Changman March 18, 1925 - July 10, 2022 Gabriel Antonio Changman Sr. was born in Piura, in the north of Peru on March 18, 1925 to his late father Juan Changman Phan, a Chinese merchant from Guangdong province, China, who married Doraliza Gallo Barranzuela, a piurana, a housewife. Gabriel had a total of 11 siblings, including five brothers (Juan, Narciso, Carlos, Edmundo, and Eduardo) and six sisters (Carmen, Elena, Blanca, Lucha, Lidia, and Elsa.). His family had a well-known bookstore by the Plaza de Armas of Piura 'Librería Changman' Gabriel was an athlete as a young man and played in the Piura Provincial Basket-Ball team in the first division of Club SAR in the 1940s. Later, Gabriel moved from the northern city of Piura to the capital (Lima) at the early age of 18 years to create his own path in life. In the capital, he got a job at the Port Authority of Callao, (formerly known as Terminal Marítimo and now called Empresa Nacional de Puertos del Perú) where he worked as an accountant. Prior to that, he trained others in the work of billing first and liquidator after Extra Works of the Shipping Companies whose ships docked at the jetties to Unload and/or Embark. He immigrated from Lima, Peru to Los Angeles, California in April 1981 at the age of 56 with his wife and two teenage children. He began working as a mail-packing clerk until his retirement at age 70. After relocating and living in Houston, Texas for a while, Gabriel and Olga moved to South Florida, in Pembroke Pines with his daughter and family in 1999. That would be their final city after their passing, first Olga in 2012 and Gabriel in 2022. Gabriel attended his wife's Christian Church in Broward for 10 years along with his son Gabriel Jr. and family, always being a selfless and good man he was foremost a caring family man. On July 10, 2022, he passed away peacefully at the age of 97 alongside his two children Patty Odar and Gabriel Changman Jr. in the city of Pembroke Pines after suffering from kidney disease for a couple of years. She is survived by her two children: Patty Odar and Gabriel M. Changman Jr., her five grandchildren: Christian Odar (26), Nicole Odar (23), Paulo Changman (13), Fabian Changman (11), and Camila Changman (1) as well like her two sisters in Piura, Peru: Luz Angelica Changman Gallo and Elsa Changman Gallo. His desire to live for his family and his determination for their well-being and success will always be remembered by all his relatives, acquaintances and friends.

A Memorial Tree was planted for Gabriel
We are deeply sorry for your loss ~ the staff at Joseph A. Scarano Pines Memorial Chapel
Join in honoring their life - plant a memorial tree

Share Your Memory of
Gabriel
Upload Your Memory View All Memories
Be the first to upload a memory!
Share A Memory
Plant a Tree